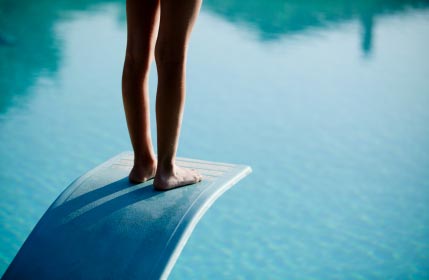 I always yearned to go swimming at the rec pool.

They had a high dive. I loved the high dive. The terror and anticipation of standing on that unsteady edge, trembling, realizing all-over-again-for-the-first-time that it looks so. Much. Farther. Down, from up here.

That trembly-kneed moment, toes curled over the edge, more of a death-grip on the sandpapery surface than a preparation to jump, breath held, wondering if you’d really been up there forever and ever, if everyone was watching you, if that cute girl over there with her dark sunglasses thought you were chicken.

The split-second eternity of the free-fall, before the colossal (in your mind, anyway) splash of the landing.

Resurfacing, gasping for air, thanking heaven for your unlikely survival as you surreptitiously (you hope) pull your bathing suit out of your butt-crack.

At seven, that was the height of risk. The apex of pre-adolescent adrenaline addiction.

But I wasn’t allowed to go to the rec pool.

We’d drive past, almost every day. It was between Mamaw’s house and home. Almost every day, I watched out the car window, sweating, sweltering, wishing I could go in the pool, resenting the squealing, yelling, splashing, happy children, feet pounding on the concrete, ignoring the yells of NO RUNNING IN THE POOL! cannonballing with mad abandon and faces stained red from the concession window sno-cones. I resented them. It was all their fault.

At least, that was my understanding. In 1986. I believed it was all because ofthem, that I couldn’t enter that otherworldly blue haven of cool summer bliss. I believed it, because I’d been told, over and over again, and it would be another three or four years, before I questioned.

You can’t swim with those kids, Mommy told me.

You can’t go in their pool. My dad shook his head.

Those kids aren’t like us. They’re dirty. They have different diseases. If you swim with them, or in water they’ve been in, you could get those diseases, too. Here. I know it’s hot. I’ll set up the sprinkler in the yard, Mamaw said, as she patted my sticky hair.

I believed them. And we were too poor for the nicer pools, usually, so I only got to go about once in the summer. The rest of the time, it was the pool at the cheap motel. Three dollars to get in for the whole day, and float listlessly around a tiny pool, surrounded by hot, cracked concrete and peeling paint. And neither of those places had a high dive. So, driving by the rec pool, every day of those hot, sticky Carolina summers, I hated those kids. Hated them for dirtying up that concrete wonderland, so that I couldn’t ever play there.

This wasn’t the sixties. Jim Crow was (supposedly) long gone.

But, at seven years old, I learned how to hate. From the people who were supposed to teach me how to love.

I was one of the lucky ones, I guess. I was smart enough, empathetic enough, to figure it all out for myself, a few years later. To ask the hard questions, and understand that the answers I was getting didn’t make any real sense. And to start disagreeing, even if it was in a whisper. And to try to learn. And to try to do better, to be better.

This town is, even now, over 92% white. That number was even higher, in 1986. And I get it, now. That pool is probably the only place “those kids” had, in the summertime, or any other time. I had a park. I had those other pools, when we could afford them. I had all kinds of places, woods I could roam in, running wild with my cousins, neighborhoods where I could ride my bike without being looked upon with suspicion.

They had that one sparkling place. And I was taught to hate them for it.

Which begs the question… who were the dirty ones, really?

2 thoughts on “The high dive, or how I learned to hate”

Let's not rule anything out
Envisioning The American Dream

polyamory with a dash of muggle

Welcome to the inner workings of my mind

Responsible Ranting on the Issues that Matter

VANDALISM? CORRUPTION? HAVE NO WHERE ELSE TO TURN? NO STORY TOO BIG OR SMALL THE OSN WILL INVESTIGATE! Please email news tips to Hildelysiak@gmail.com

"Let me live, love and say it well in good sentences." - Sylvia Plath

Count Rugen's Got Nothing on Me.

Thoughts on the scene.